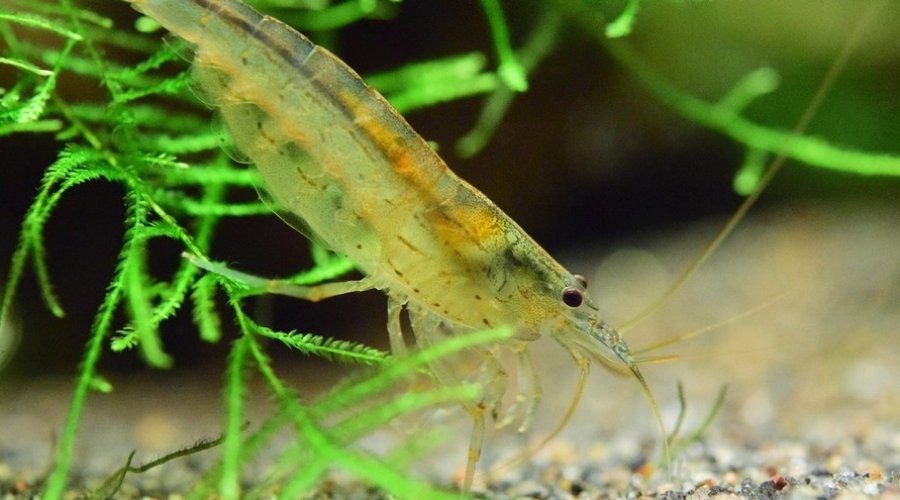 All aquarists struggle with nuisance algae. Good water quality is the first line of defense against algae overgrowth, but these algae-eating inverts make a good cleaning crew and are also beautiful additions to your planted aquarium. In general, shrimp are a better pick for brush and thread algae, while snails are excellent consumers of filmy algae on plant leaves, aquarium glass, and hardscape.

Shrimp have just as much personality as fish and are very entertaining to watch, especially in a heavily planted freshwater aquarium. Most algae-eating shrimp won’t be much help with filmy algae such as diatoms and blue-green algae, but will eat thread and brush algae.

Shrimp will not harm their tankmates, but are a favorite food of larger fish. Therefore, they may be best-suited for heavily planted tanks that have plenty of hiding spaces and smaller, non-aggressive tankmates.

Amano shrimp, named after the famous aquascaper Takashi Amano, are some of the most popular and effective algae-eating shrimp in the planted tank hobby. Amano shrimp will tear through most types of algae, and will also eat detritus and uneaten food.

At about 1.5 inches, Amano shrimp are larger than many other shrimp varieties, so are less likely to be eaten by fish tankmates. However, they will still be consumed by large or aggressive fish species so should be kept with docile tankmates. Amano shrimp are social and will do best in groups of three or more.

Amano shrimp are particularly sensitive to copper, so you’ll need to watch your micronutrients in your fertilization regimen.

Cherry shrimp are one of the most visually striking varieties of freshwater shrimp available to freshwater aquarists and can be found in many local fish stores. Cherry shrimp also breed readily in captivity if the fry are given a proper habitat. They do best in large groups, so we recommend purchasing 10 or more, to begin with.

Cherry shrimp will eat most kinds of algae as well as dead plant leaves and leftover food. Due to their small size, they may be eaten by predatory fish, but they’re also very fast and great at hiding, so will likely thrive in a heavily planted tank.

Ghost shrimp are very inexpensive and widely available. They are not as effective as cherry or Amano shrimp as algae eaters, but will eat hair algae, so are a good choice for this variety. Ghost shrimp are also excellent scavengers of fish waste, dead plant leaves, uneaten food and other detritus, so will do wonders for your water quality, and in this way can curb algae growth.

Ghost shrimp are happiest if kept in large numbers in a heavily planted tank, and will breed readily in these conditions, ensuring a constant supply.

Snails excel at eating filmy types of algae such as diatoms and blue-green algae, although some snail species eat other types of algae as well. Snails are also excellent scavengers, helping to rid your tank of detritus, dead plant matter, and uneaten foods. Clown loaches and kribs will eat even large species of snails, so cannot be kept with snails.

Yellow apple snails are some of the largest ornamental snails available. They are usually sold as babies and can reach the size of a baseball when fully mature, so should only be added to larger aquariums. However, bright coloration and large size are quite striking in appearance, so they do make a good ornamental addition.

Yellow apple snails consume most varieties of algae, but excel at eating algae that grow on plant leaves, substrate, and aquarium glass. They are good scavengers, but do produce a lot of waste themselves, so only 1-2 should be kept in larger tanks. They do well in heavily planted tanks and do not eat plants, but may dig up delicate plants that are not well-rooted.

Nerite snails have a striking, zebra-patterned shell and a significant appetite for algae. They measure about an inch when fully grown, so are a very visible ornamental addition to your freshwater aquarium.

Nerite snails eat nearly every variety of algae, including green spot algae and green beard algae. They are bottom-dwellers, so do an excellent job at clearing fish waste and keeping the substrate clean.

Nerite snails need a pH of 7.0 or above, and hard water maintains their shells, so may not do well in very acidic, soft water conditions. They also lay many small white eggs around the tank, which some aquarists consider to be unsightly. Further, nerite snails have a proclivity for climbing out of tanks, so a tight-fitting lid is a must.

Ramshorn snails, so-named for their unique shell shape, and are ready consumers of many types of algae as well as dead plant matter. They are excellent at cleaning plant leaves, glass, and hardscape. Like nerite snails, ramshorn snails require harder, more alkaline water conditions to thrive.