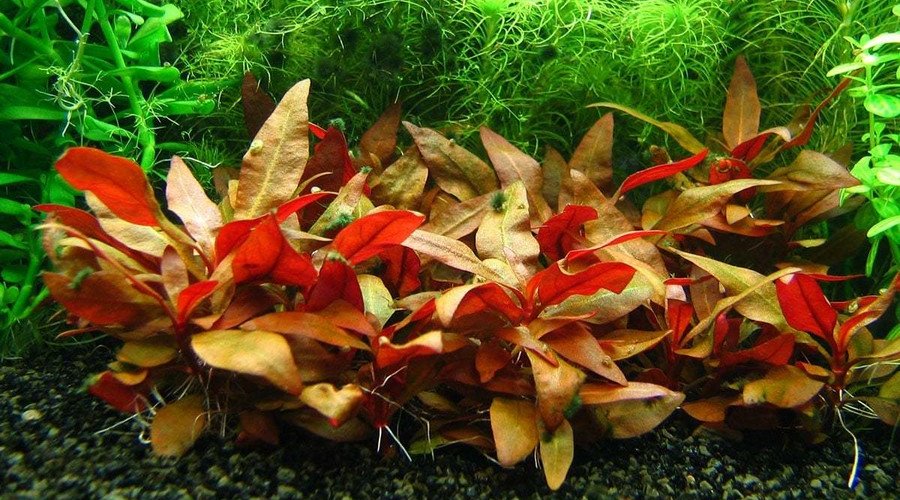 There are around 170 species of the genus Alternanthera known in population. Alternanthera reineckii was first brought into the Netherlands in 1965, at that time, being called Telenthera osiris. It is regarded as one of the few species in it's family that can grow while being entirely submersed in an aquarium. It originates from South America, where it can be easily discovered along riversides in areas that sometimes become flooded during the rainy season.

There are more than five different varieties that are cultivated. Alternanthera reineckii "Rosa", also advertised under the trade names of "Alternanthera rosaefolia" and A. "pink", is relatively easy to cultivate and is the most widespread species of plant found in the hobby and trade.

A. reineckii "Rosa" may prosper under low lights, and without having additional CO2 injected, however, it will never be able to reach its' full potential in that environment. The ideal conditions include Medium to high Lighting intensities with adequate CO2 injection.

In tanks that are set up in with low lighting, the lower leaves of this plant tend to fall off. The plant can thrive in water that is either soft or hard, and the pH level of the water does not play a significant role it its' growth either. However, the plant do better in water that is slightly acidic.

Unlike many red-colored plants, this plant prefers a nutrient-rich environment that has high levels of nitrate (10mg/l and over) and phosphate (0.5 mg/l and over). When grown in water that has a lower nutrient concentration, fertilizing the plant through the substrate may help to improve the overall health of the plant as well as increase its' speed of growth by quite a bit.

When is plant is planting for the first time, it is important to leave a certain amount of distance between the stems. This species is easily propagated with cuttings that trimm off the shoot tip, and then by having those replanted into the substrate. Lateral shoots will start growing quickly on the leftover part of the stem, which makes the plant appear more bushy.

The purple color of the underside of the leaf makes the A. reineckii "Rosa" a intense point of contrast to the green aquatic plants that are mostly available, which is especially true when it is planted in groups. Three to five resilient shoots may be utilized for establishing color accents in the background.

In nature aquariums, this plant is not very popular. But on the other hand, Dutch tanks use it heavily, in fact, it is the most popular red plant.