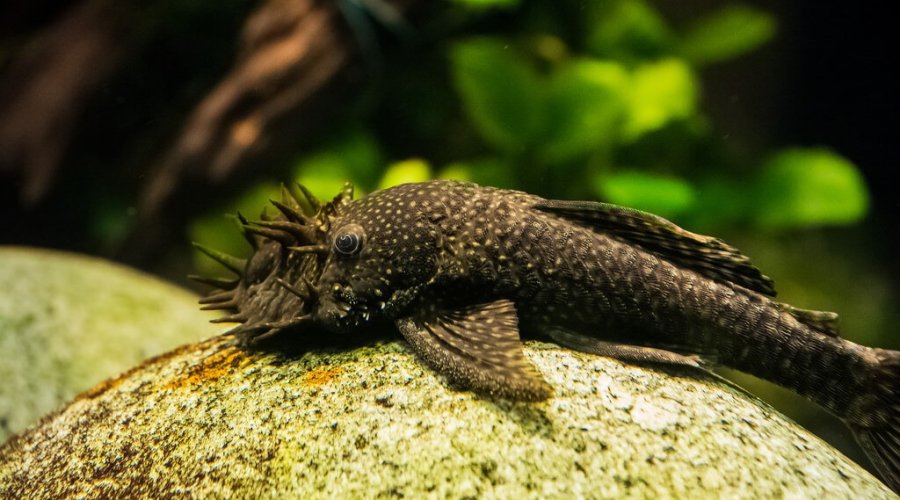 Algae is unsightly in your planted aquarium, and can also be detrimental to your plants. Good water quality should be your first line of defense against algae, but these popular algae-eating fish can provide additional algae control and help to clean up dead leaves and other detritus as well. Better yet, some algae-eating fish species are very beautiful, so make excellent ornamental additions to your tank as well.

A number of different fish species will nibble at algae. However, here’s a roundup of some of the better algae-eating fish including what species of algae they will consume and their compatibility with other tankmates.

Bristlenose plecostomus (or plecos) are fantastic all-around algae eaters and cleaners, and reach a maximum size of about 6 inches, unlike common plecos which can reach well over a foot in length. Bristlenose plecos eat most kinds of algae, but are particularly useful for eating green spot algae, which many other algae eaters avoid.

Bristlenose plecos are compatible with most other fish, as they are peaceful and as adults are sizeable enough not to be eaten by larger tankmates. They are social fish, so are best kept in groups of three if possible. Because of their voracious appetites, it is recommended to supplement the diet of bristlenose plecos with sinking algae pellets.

True Siamese Algae eaters, Crossocheilus siamnsis, are excellent algae eaters and are very peaceful. They are schooling fish best kept in groups of 6 or more, and are compatible with any tropical community fish. They are known as some of the only aquarium fish that eat nuisance black brush algae, and will happily eat many other kinds of algae as well. True Siamese Algae Eaters have a very striking black stripe running down the length of their bodies, and shiny silver scales.

Otocinclus catfish are a classic algae-eater and for a good reason. They only reach about two inches in size, but can eat an impressive amount of algae for their size. Otocinclus eat many different types of algae, but are partial to brown algae and soft green algae, so may be particularly useful in controlling these blooms. Otocinclus are unassuming, but when schooling together can be quite attractive.

Otocinclus are schooling fish so should be kept in groups of five or more. It’s also worth noting that they are somewhat sensitive to water quality, so probably aren’t a good addition to a brand new tank. Also because of their small size, they may not be compatible with large or aggressive tankmates.

The colorful American Flagfish is a type of killifish that is often sought out for its algae-eating prowess. They eat most kinds of algae including blue-green algae, which some other species are reluctant to approach. The American Flagfish is one of the flashiest algae-eating fish varieties with a striking coloration. They also swim in the water column, so are more visible than the other catfish species we’ve mentioned.

American Flagfish are semi-aggressive, so can hold their own with tankmates such as angelfish, but may pick on shier fish species. Females tend to be less aggressive than males, so if you have a peaceful community tank, it may be advisable to stick to the fairer sex.

Farlowella Catfish, also known as Twig Catfish or Whiptail Catfish, are another larger algae-eating fish species. Farlowellas can reach up to 8 inches in length, and have a slender, brown-colored body. They consume most kinds of algae, and their diet may need to be supplemented with algae wafers once your tank is clean, as Farlowellas are larger and have a voracious appetite. Farlowella cats are striking in appearance, with a long and slender body.

Unlike some of the other species we’ve covered, Farlowella cats are solitary, although they get along well with one another, so aquarists can keep more than one if desired. Farlowella are peaceful and are compatible with most other tankmates. They do like to hide, so thrive in heavily planted tanks with plenty of bogwood.