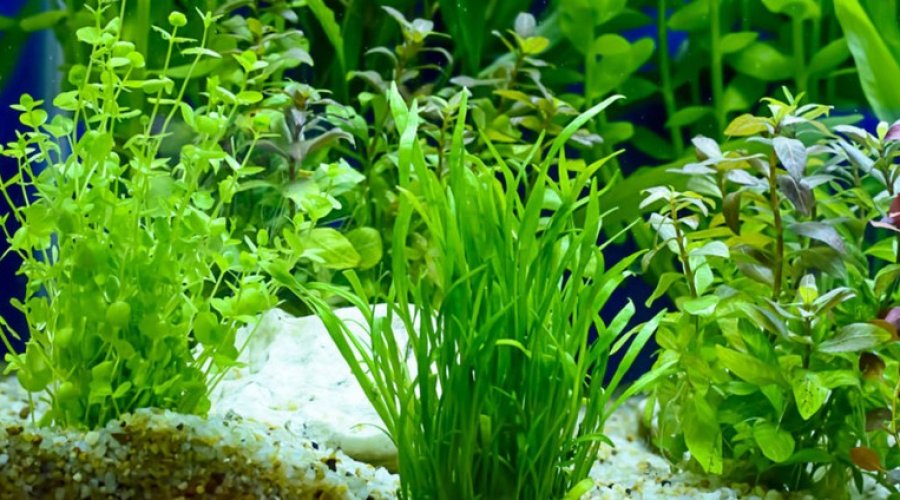 Part of the beauty of having a planted aquarium is the ability to house a captivating variety of aquamarine plants that create an alluring environment. And while there are literally hundreds of different types of plants to choose from, there are some that are more popular than others. The most popular plants were planted aquariums are those that are easy to take care of, thrive exceptionally well with the CO2 enhanced environment and have a long-standing life that allows them to floors beautifully over time. When contrasted against other plants, these five selected here not only enhance the aesthetic appeal of your project but will be highly enjoyable to watch develop and beautify your aquarium tank.

Found mostly in Australia, these lush green arrow-shaped flowering plants are normally found growing on top of large rocks and wooden logs that are partially or fully submerged in water. As an amphibious plant that can be partially submerged underwater and still be able to thrive, this rosette plant can grow to be as wide as 60 inches, and as tall as 15 inches. The plant features thick and tough leaves the have a leather-like appearance, being dark green in color on the top side while showcasing a lighter shade of green on the underside.

As a virtually indestructible plant, the lifespan of the Anubias barteri var. caladiifolia’sindividual leaves can live for years, while the creamy white spadix flowers it sprouts only last several months. The flowers produced by the plant, having similarities with a cala lily, produce seeds that keep the reproductive cycle circulating continuously, and flourish best when the plant is completely submerged.

Maintaining the plant is easy, especially since the plant is extremely tolerant of various living conditions, and not often eaten by plant-eating fish because of its’ unpleasant taste. Ideal conditions contain an alkalinity of 3 to 7 dKH, accompanied by a pH level of 6.5 to 7.5. However, these plants can thrive well with pH levels as high as 9.0, adapting even better with the help of continuously flowing water.

When you want to multiply the plant’s size, simply cut the leaves situated closest to the rhizome, which is clearly visible on this plant. With adequate growing conditions, the plant will propagate with side shoots that will develop on the rhizome, which leads to rhizome division, and a wider plant. You can also encourage thicker growth by making small incisions on the rhizomes so that the plan will develop additional shoots that rise from the cuts. While they are slow growing plants that take years to reach their optimum size, they do respond to additional lighting and increased CO2 levels

Mostly grown in Cameroon, West Africa, this plant is mostly found in shady locations, usually along waterway banks, thriving in forested and wet locations. Even though this is a very slow growing plant, even with enhanced lighting, this plant, named after the god of the afterlife, is one of the smallest in its’ species, growing as long as 6 inches and can get as wide as 5 inches. Considered to be an indestructible plant, the Anubias barteri var. nana is a very noteworthy and eye-catching plant, which is why it is often used a centerpiece in an aquarium while being attached to rocks or driftwood.

These plants actually thrive best in subdued light because it wards off the growth of a particular type of algae that is toxic to them-even though placing Siamese Algae Eaters, Otocinlus or other algae eating fish can help rid the plant of the algae if you insist on increasing the lighting of the aquarium. Small fish use this plant as a hiding place as it grows horizontally in a singular direction that provides great cover from intruders. An enhanced CO2 environment will speed up the growth processes noticeably, but no fertilizers are necessary, which makes them a great plant for your aquamarine project. If you want to reproduce the plant, try cutting mature rhizomes off the parent plant, dividing the plant along the dormant buds. Or, you could place the entire rhizome in water, allowing plantlets to form that can be divided then planted later.

This invasive species of wild plant naturally grows in abundance in Nova Scotia, and Alaska along quiet still waters such as ponds, lakes, streams, and marshes- due to the neutral or alkaline content. As a great oxygenator for the aquarium, the Foxtail does not have roots. Instead, pale, modified leaves that look similar to roots anchor the plant to the bottom of its environment, or it will simply float on the surface of the water. Aquatic invertebrates depend on the Foxtail species for survival due to its large surface and submerged leaves. Unlike some other aquamarine plants, this plant must always remain fully submerged as it will not live long otherwise.

As one of the most common and popular aquamarine plant species, the Cryptocoryne undulata, whose name means “hidden stick,” comes from Malaysia, Sri Lanka, New Guinea and Indonesia and are characterized as water plants that have fast growing, strong root systems that generate additional plants from one side of the tank to the other rapidly. While this plant is very easy to take care of, they often adapt to new environments by cultivating Crypt melt which ends up killing off all the leaves but are very rapidly replaced with thriving leaves when left alone. This also leads to frequent color changes in the plant, which makes it beautiful as an addition to a prominently green tank.

These plants develop well in low-lighting environments, requiring as little as 4000k neon tubes to be properly illuminated. But, they will not grow efficiently in gravel or sand because they require an extensive amount of nutrients from fertilized clay or organic rests. Known as a slow growing plant, the cryptocoryne plant also requires a stable nitrate balance, so it is not recommended that you insert this plant into a newly built aquarium, but one that has aged a while.

This impressive plant, a native of the Philippines, is much unlike other plants in the same species, as it permanently grown underwater. Because of this, and the fact that it grows best in hard, alkaline waters, cichlids from Lake Tanganyika and Lake Malawi are ideal to pair with the crypts. While they thrive impressively with CO2 enhanced aquamarine environments, they are also highly adaptable to tanks with low CO2 supply, which makes them very easy to take care of. Even though they can live in varying environments, it is best that you divide the plants and rinse off the old water from the plant prior to introducing it to new water conditions the differentiate by more than 2 pH levels.