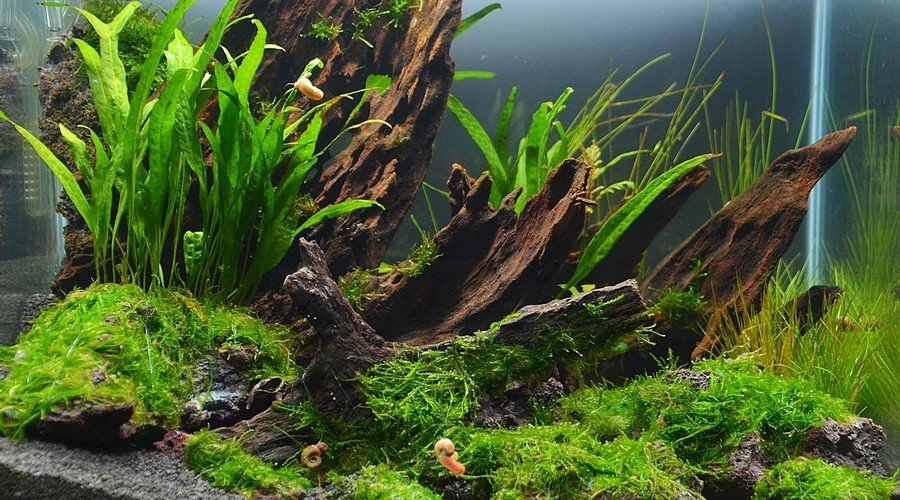 The nitrogen cycle inside of a planted aquarium is the method by which Ammonia or Ammonium is converted into Nitrates or Nitrites. The Ammonium is produced from diffusion of decomposing matter such as gills, uneaten fish food, and fish waste. Once they are converted in the Nitrates, they go through another conversion process. Either it becomes free nitrogen gas that then evaporates from the water, produced as a result of denitrification of anaerobic bacteria. The other alternative is for you to add chemical absorbents or regularly change the water in order to remove or lower the Nitrate concentration.

Without this process, it would be nearly impossible for the water to be a suitable living environment for fish or other inhabitants because of the unbalanced concentration in ammonia levels that happen as a natural result. Ammonia is assimilated directly by plants such as Hornworts, which is required for the process of biosynthesis. Nitrosomonas and other Nitrifying bacteria rapidly break down ammonia into Nitrate (NO2), stripping the hydrogen molecules from the ammonium compound to utilize as an energy source. Oxygen molecules then attach themselves to the isolated nitrogen molecules, which in effect create oxide nitrate (NO2).

In other instances, involving other groups of bacteria such a Nitrobacter, the ammonia is assimilated differently. The bacteria convert the nitrite into nitrate, using its’ own nitrite oxidase enzyme. The resulting nitrate serves as either a source of nutrients by plants or broken down through the anaerobic bacteria process like Pseudomonas to convert the nitrate into nitrogen gas. While some have proposed that ammonia kills the plants, which obviously is not true. Ammonium can be quite safe when diluted in the aquarium water, but because it quickly converts into ammonia when the pH level is increased, it is treated in a similar manner.

The key to providing a thriving living environment for tropical aquarium fish is the existence of the nitrogen cycle. Aside from the aquatic fish and plants that call aquariums a habitat, so do other living organisms. The good bacteria that is needed in order for the conversion of ammonia to nitrite and then into nitrate to happen is depended upon by the plants and is easily rinsed away during water changes. That is not to suggest that water changes should not frequently be conducted. In fact, you should strive to conduct weekly changes in which only 50% of the water is replaced. In order for the nitrogen cycle to most effective, you must maintain a delicate balance between the aquatic plants, tropical fish, and helpful bacteria. Maintaining a pH level above 7 is most beneficial for the functioning of the cycle, and if you are adding some of the good bacteria to the planted aquarium, it is vital that you maintain an even higher pH level when first starting out.

The Bacteria is The Lifeline Of The Necessary Balance

The ultimate goal of the cycle is to maintain a sufficient supply of food for the fish, in order for them to produce enough waste to provide the correct conditions for Ammonia to be created, which leads to the production of nitrate bacteria that produces enough waste for the formation of nitrite, which then feeds the nitrate bacteria in order to produce the nitrates that feed the aquatic plants.

Any disruptions in the food supply that feed any of the bacteria will have detrimental yet rippling effects on the cycle. This is different from what most expect. Usually, the concentration is on producing enough bacteria. But in this delicate cycle, it is the food that feeds the bacteria that is the concern because they cannot survive without a source of food. That means that when establishing the nitrogen cycle, avoid spiking the ammonia and nitrate levels, which would starve the bacteria and cause a complicated balance.

Also, avoid adding any plants for the first month of the cycle. This will prevent you from killing off your plants prematurely and being forced to fork up the cash to buy replacements. The plants die because the water is not suitable until the nitrogen cycle has gone through the entire process, and even more, the dead plants negatively affect the other plants in the planted aquarium because of the organic matter that is produced. Because decomposed matter that is derived from dead plants adds to the level of nitrate in the water, stunts the growth of other living organisms, and prohibits the absorption of vital nutrients, planting the plants too early could harmfully contaminate the aquamarine environment- but not so much that it kills them.

Biologically, the most important conversion is the transformation of N2 into a readily available substance that can be consumed by the plants. Certain bacterias, such as Rhizobium, are especially helpful in carrying out that conversion. As a specialized bacteria, Rhizobium is responsible for converting N2 into ammonia so that the plants can absorb the nutrient through their roots.

The ammonia can then be synthesized into amino acids (2NH3) through a separate process called Nitrogen fixation, with the help of another helpful bacteria of the anaerobic species- requiring no oxygen. Instead, they are able to catalyze the reaction using enzyme nitrogenases. The anaerobic properties of certain plants allow for the production of the third type of helpful nitrogenase-producing bacteria, such as soybeans.

Nitrifying bacteria convert ammonia or ammonium into nitrate, while denitrifying bacteria convert nitrate into nitrogen gas or Hydrogen sulfide- depending on the circumstances. Actinomycetes, produce fungi-like filamentous cells, decomposed organic substances like cellulose and Chitin. These compounds are normally produced by exoskeleton species of crustaceans and are difficult to decompose due to their large size.

All in all, the Nitrite or nitrogen cycle is one of a delicate nature, but essential to the creation of a balanced aquamarine environment. While the focus, when creating and maintaining a balanced environment, is the sufficient supply of bacteria, understanding the process also requires monitoring pH levels, organic waste and beneficial bacteria growths that are produced as byproducts. By comprehending how Ammonia, nitrites, and nitrates all work together in the ecosystem of an aquarium, you will be able to build a thriving and growing environment that is healthy and visually appealing.